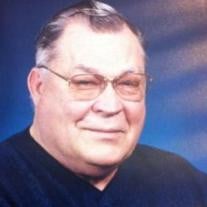 Lawrence “Larry” Mortimore, 81, of Coloma, passed away Wednesday morning, January 11, 2012, at his home. Funeral services celebrating his life will be held at 11:00 A.M., on Monday, January 16, at Midway Baptist Church, 7517 Red Arrow Highway in Watervliet, with Pastor Mark Cowell officiating. Burial will follow at North Shore Memory Gardens in Hagar Shores with Military Rites. Visitation will be held from 3:00 until 5:00, on Sunday afternoon, January 15, at the Davidson Chapel of Florin Funeral Service, 249 E Center Street, in Coloma. In lieu of flowers, memorials may be made to either Midway Baptist Church, Diabetes Research or to a donation of the donor’s choice. Messages of condolence may be sent to www.florin.net. Larry was born on March 20, 1930, in Veedersburg, Indiana, to Cecil and Thelma Mortimore. He proudly served his country during the Korean Conflict in the U.S. Army. Larry married the ‘love of his life,’ Dorothy Mae Allen on August 27, 1949. Together they had three children. Larry drove for Shindledecker and for CITGO Oil for many years. Larry enjoyed working with both farm equipment and heavy trucks. He will be remembered for his sense of humor and for his ‘teasing.’ Most of all, Larry cherished time spent camping and traveling with his family especially after his retirement. Larry is survived by his wife Dorothy of 62 years; children, Deann Kuelbs, Debora (Mark) Tenter, and Lawrence Mortimore all of Coloma; grandchildren, April and Heidi Kuelbs, Matthew (Brandy), Jacob (Dana) and Kristopher Tenter, and Heather and Lauren Mortimore; great-grandchildren, Jackie and Alex Gettig; sister, Iris (John) Amos of Texas; and by his brother, Emery Rader, Jr. of St. Joseph. In addition to his parents, Larry was preceded in death by his sister, Marjorie Radtke.

The family of Lawrence "Larry" Mortimore created this Life Tributes page to make it easy to share your memories.

Send flowers to the Mortimore family.