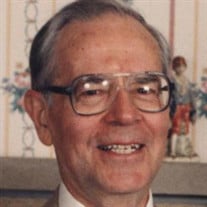 Atty Lester E. Page, Sr, 95, of Bridgman and formerly of Benton Harbor died Thursday, September 7, 2017 at the Lakeland Medical Center in St. Joseph. Services celebrating his life will be held at 1:30 PM on Thursday, Oct 5, at the Pilgrim Congregational Church in Lincoln Township with Rev. David Stout officiating and Rev. Gordon Page giving the eulogy. Les donated his body to the University of Michigan Medical School. Memorials may be made to the 2017 Hurricane Relief Fund, Sarette Nature Center or the Berrien Community Foundation. Arrangements are by Florin Funeral Service. Please share memories, messages or photos at www.florin.net. Les was born on Sept 22, 1921 in Washburn, WI to John and Mabel Page. Les’ family moved to Fruitport, MI where he graduated first in his class from Fruitport High School. He attended Muskegon Community College and then transferred to the Univ. of Michigan. Les enlisted in the US Army in 1942 and was commissioned a 2nd Lt. in the Medical Corp. He served in France, Belgium, and Germany until his discharge as a Captain in 1945. He married his wife, Barbara Warnock, in 1943 and she preceded him in death in 2014. After discharge Les then returned to the Univ. of Michigan to complete his education and graduated from the Univ of Michigan Law School with a Juris Doctor Law Degree in 1948. He then moved his family to Benton Harbor and joined the law firm of Elden Butzbaugh, Sr. The law firm was later joined by Chester Byrnes, Alfred Butzbaugh, and John Dewane. In 1963 he was President of the Berrien County Bar Association and in 1983 he was elected a Fellow of the American College of Probate Council. He was a well known and respected attorney in Twin Cities area until his retirement in 1986. Les and his family were long time members of the First Congregational Church in Benton Harbor and Les held many offices in the church including Moderator. He was a dedicated Christian. When the church closed he moved his membership to Pilgrim Congregational. Les also served on the Board of the Berrien County Council of Churches. Les had a keen interest in education. He was a member of the Fairplain School Board and was vice-chairman of the 16 school district consolidation. After consolidation he served as Secretary for the Benton Harbor Area School District and served as President for 3 years. He was also active in community affairs serving as the Secretary Treasurer of the Berrien County Community Foundation for many years, serving as Chairman on the Salvation Army Board for many years, and serving on the Twin Cities Airport Board. He was also a member of the Benton Harbor Exchange Club. Les was an attorney by profession but a farmer at heart. He purchased a farm near Hartford and planted it with Christmas trees. He loved working the farm and nurturing the trees as they grew. He also enjoyed fishing the many inland lakes and taking the family on camping vacations which everyone enjoyed. He also enjoyed traveling with his wife and traveled to Canada, Europe, Asia, Middle East, Mexico and Russia. Along with all of these activities he liked to read biographies, history, and philosophy books. He was also an avid fan Univ of Michigan Football and Basketball and the Detroit Tigers. His family includes his children, Lester (Sandy) Page, Jr. of Stevensville, and Dr. Ann (Roger Prior) Page of Richland, MI; his grandchildren, Beverly (George) Ketchel of Broomfield, CO, Becky (John) Yoza of Pearl City, HI, Rostam Ahmad Daud of Kalamazoo, Norlia Ahmad Daud of Kalamazoo, and Nikki Blue Page of Detroit; his step-grandchildren, Erin Buckler and Amber (Rick) Shureb and his numerous great grandchildren, nieces and nephews. He was also preceded in death by his son, David and his 4 brothers, John, Oliver, Russell and Lawrence and his sister, Louise Keur.

Atty Lester E. Page, Sr, 95, of Bridgman and formerly of Benton Harbor died Thursday, September 7, 2017 at the Lakeland Medical Center in St. Joseph. Services celebrating his life will be held at 1:30 PM on Thursday, Oct 5, at the Pilgrim Congregational... View Obituary & Service Information

The family of Lester E. Page Sr. created this Life Tributes page to make it easy to share your memories.

Send flowers to the Page family.