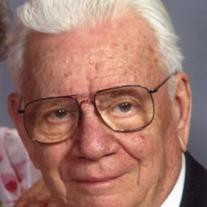 Coloma – Lewis J. Cordaro, 90, of Coloma, passed away Wednesday, January 16, 2013, at Lakeland Regional Medical Center in St. Joseph. Mass of Christian Burial will be celebrated at 11:00 A.M, on Monday, January 21, at St. Joseph Catholic Church, 179 Lucinda Lane in Watervliet, with Fr. John Peter Ambrose officiating. Burial will follow at North Shore Memory Gardens in Hagar Shores with Military Honors. Visitation will be held Sunday afternoon, from 3:00 until 6:00, with a Rosary Service at 5:30 at the Davidson Chapel of Florin Funeral Service, 249 E. Center Street, in Coloma. Memorials may be made to either St. Joseph Catholic Church in Watervliet or to the North Berrien Senior Center in Coloma. . Lewis was born on February 6, 1922, in Coloma, to Salvatore and Raffaella Cordaro. He proudly served his country during WWII in the U.S. Navy, aboard the U.S.S. Nehenta Bay carrier where he served on-board as a ship carpenter. Lewis married Mary Ann LaPorta on October 11, 1947 and together had four children. Lewis worked for A & P Grocery in Benton Harbor as a meat-cutter for 42 years. A life-long member of St. Joseph Catholic Church in Watervliet, he served his church in various capacities including organizing their BINGO games. Lewis was an honorary life-member of the Knights of Columbus Council 4055 where he achieved being a 4th Degree Knight and held the position of Grand Knight. He was a “die-hard” Chicago Cubs fan, and enjoyed traveling and bowling. Most of all, Lewis cherished his family – particularly spending time with his grandchildren and great-grandchildren. Lewis is survived by his wife Mary Ann of 65 years; children, Mary Lou (Bob) Pliley of Carmel, Indiana, Lewis S. Cordaro of Palm Springs, California, Barbara (Rolland) Boyd of Watervliet, and Jim (Bruce Rubin) Cordaro of Minneapolis, Minnesota; six grandchildren; seven great-grandchildren; brother, Michael (Loretta) Cordaro of Stevensville; sister, Grace (Sam) Guardino of Benton Harbor; and by numerous nieces and nephews. In addition to his parents, Lewis was preceded in death his grandson, Eric.

The family of Lewis J. Cordaro created this Life Tributes page to make it easy to share your memories.

Send flowers to the Cordaro family.