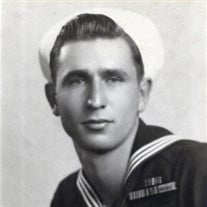 Lloyd “Sandy” Sanders, 92, of Benton Township, died Tuesday morning, March 21, 2017 at Royalton Manor. Services celebrating his life will be at 11:00 a.m. on Saturday, March 25, 2017 at Fairplain Chapel of Florin Funeral Service in Benton Harbor. Burial will follow at North Shore Memory Gardens in Hagar Township with full military honors. You are invited to meet with his family and friends on Friday from 5 to 7 at the Fairplain Chapel. Memorial donations may be made to Hospice at Home. Please share memories, messages or photos at www.florin.net. Sandy was born in Benton Harbor at the Four Corners on Dec. 18, 1924 to Lloyd and Lucille (Snider) Sanders. He proudly served his country in the U.S. Navy during World War II. He married Idella Bucholtz on Dec. 30, 1950, and they have celebrated over 66 years of marriage. Sandy first worked at New Products and then worked in construction with Browns Construction, then Pearson Construction and lastly at Fiskars. He retired in 1989. He was also a fireman with Benton Township Fire Dept. for 8 years. He was a member of Calvary Bible Church and the VFW. Among the things he enjoyed were bowling, hunting, fishing and racing cars at the area race tracks. He also enjoyed sports both as a fan and as a participant especially softball. Sandy was a big hearted and strong individual who was willing to give anyone a helping hand. Most importantly, he cherished time spent with his family and friends. His family includes his wife, Idella; his children, Robin (Julie) Sanders of Coloma, Gary (Diane) Sanders of Augusta and Ricky Sanders of Hulett, WY; his grandchildren, Christopher, Steven, Blake, and Dakota; and his great grandchild, Cael.

The family of Lloyd "Sandy" Sanders created this Life Tributes page to make it easy to share your memories.

Send flowers to the Sanders family.