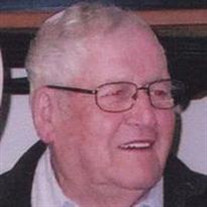 Lloyd O. Wells, Sr., 87, of Hagar Township, passed away on Wednesday evening, Sept. 28, 2016 at his home. Services celebrating his life will be on Tuesday, Oct. 4 at 11:00 a.m. at the Davidson Chapel of Florin Funeral Service, Coloma. Burial will follow at North Shore Memory Gardens with Military Honors. Visitation with his family will be on Monday, Oct. 3 from 6:00 PM to 8:00 PM. at the Davidson Chapel with Masonic Rites at 7:30 PM. Memorials may be made to the American Cancer Society. Please share memories, messages, or photos at www.florin.net Lloyd was born in Five Mile, AR on April 5, 1929 to William H. and Mae (Prince) Wells. He proudly served his country in the US Army during the Korean Conflict. He married Janet Schrubba in 1964 and together they have celebrated 52 years of marriage. Lloyd retired in 1987 after 40 years of employment at the Whirlpool Corp. Lloyd was a member of several organizations to include Coloma Mason Lodge #162, VFW Post #1137, Coloma American Legion Post #362, and a life member of Disabled American Veterans. He enjoyed camping, playing pool and tinkering around his garage. More recently he enjoyed sitting around the campfire at his home with his family. Lloyd loved being with his family especially his grandchildren. He will be really missed by his family. Lloyd’s family includes his wife, Janet; his children, Delvin (Hazel) Wells of Benton Harbor, Kelly (Carla) Wells of Mountain View, AR, Barry (Lisa) Baugh of Coloma, Tammy (Fred) Maddron of St. Joseph, Lloyd (Angie) Wells, Jr. of St. Joseph, and son-in-law, Robert Mueller; 10 grandchildren and 6 great grandchildren. He was preceded by his parents, his daughter, Debbie; his son, Jeffery, his brothers, Ewin and Thurman, and his sister, Arveta.

Lloyd O. Wells, Sr., 87, of Hagar Township, passed away on Wednesday evening, Sept. 28, 2016 at his home. Services celebrating his life will be on Tuesday, Oct. 4 at 11:00 a.m. at the Davidson Chapel of Florin Funeral Service, Coloma. Burial... View Obituary & Service Information

The family of Lloyd O. Wells Sr. created this Life Tributes page to make it easy to share your memories.

Send flowers to the Wells family.