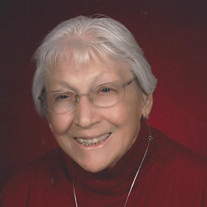 Louise Hawkins passed away on October 9, 2017 at Pine Ridge in Lincoln Township, MI after a long three year battle with dementia that left her unable to speak or to enjoy life. God reached down and picked her up to be with Him, so she could be able to speak her mind, feel creative and be strong once again. . Friends and relatives are invited to meet with the family from 4 to 8 PM on Friday, October 13, 2017 at Davison Chapel of Florin Funeral Service, 249 E. Center St., Coloma. There will be no funeral services, cremation will take place. Burial of ashes will be at a later date as a private family memorial. Donations can be made to Wounded Warriors if you wish. Please share memories, messages or photo at www.florin.net Louise was born on March 20, 1924, to Italian parents, Dominick and Elizabeth Valenti the second oldest of five children. She grew up in the Lawrence and Riverside area and she went to Coloma High School, but had to drop out in the ninth grade, to help out on her family’s farm. She went on to get her GED when she was in her forties, which she was very proud of. Louise lived on the family farm and after a hard day’s work, she and her sister Mary would enjoy playing the guitar and singing with their siblings and friends, all different types of music, including her favorite, Country-Western. When WWII came about, Louise went to work to help the war efforts for her country. She worked at Rosback Company in Benton Harbor MI, riveting P-38 wing tips to help the cause for the military. On a trip to Florida with her sister Mary, (to see Mary’s husband stationed there), Louise met her husband Enoch (Andy) who also was in the military. She was on one train and he was on another, and with these trains side by side, they managed to communicate and he asked her to write to him. The following year, in December of 1945, they were married and were together for almost 53 years until Andy passed away in 1998. Together, they built a house in Riverside, for which she lived in for over 50 years. After raising her children, she went back to work at Mercy Hospital, prior to it merging with Memorial Hospital, that later become Lakeland Hospital. She retired after 25 years from the physical therapy department. Louise was a very active person who could never just sit and read. Her interests included gardening, cross-stitch, cooking, ceramic painting, 1000 piece puzzles; she also was a photographer in her younger days, painting with oil paints, to turn black and white portraits into color ones, she was in the singing group the “Sing-a-lings” from St. Joseph and also was in a formal square dancing group with Andy. Her most favorite thing to do was to be with her children, who she cherished her entire life and taught all of us how to be caring and thoughtful to others and to each other. Surviving are her four children and spouses, Dan (Diane) Hawkins, Linda (James) Hays, Terry Hawkins & companion, Vonda French, and Mary (Wallace) Oldham; 11 grandchildren; 14 great-grandchildren; her sister Diann Harris; several brothers-in-law, sisters-in-law, as well as many nieces and nephews that she loved dearly. Waiting for Louise, beside her parents and her loving husband Andy, will be her sister, Mary Howard and her brothers, Nathan Valenti and Benedict (Ben) Valenti, waiting to play that guitar with her again. We will miss her greatly, until we meet again……….We Love You Mom

Louise Hawkins passed away on October 9, 2017 at Pine Ridge in Lincoln Township, MI after a long three year battle with dementia that left her unable to speak or to enjoy life. God reached down and picked her up to be with Him, so she could... View Obituary & Service Information

The family of Louise Hawkins created this Life Tributes page to make it easy to share your memories.

Send flowers to the Hawkins family.