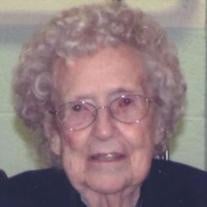 Coloma – Lucille A. (Ryno) Umphrey passed away Tuesday, February 21, 2012, at Sunset Shores Assisted Living Facility at the age of 100. Funeral services celebrating her life will be held at 7:00 P.M., on Friday, February 24, at the Davidson Chapel of Florin Funeral Service, 249 E. Center Street, in Coloma, with Pastor John Sternaman officiating. Burial will be private at a later date at Coloma Cemetery. Visitation will be held from 5:00 until the time of the service on Friday, at the funeral home. Memorials may be made to either Hospice at Home or to the Coloma Fire Department. Messages of condolence may be sent to www.florin.net. Lucille was born on December 12, 1911, in Coloma, to Smith and Estella (Shoup) Ryno. Lucille attended Coloma High School and graduated on May 27, 1930. On April 9, 1932, she married Homer F. Umphrey in South Bend, IN. They celebrated 69 years of marriage until his death in 2001. She resided in Coloma all her life and lived in the same home for 59 years. Lucille was a homemaker and fabulous cook who kept an immaculate house. She enjoyed spending time with family and her holiday dinners were always special. She actively babysat for her grandchildren and sewed doll clothes and quilts for them. Although she did not work outside the home, she was always there to care for and help friends and family in need. While at Sunset Shores she was admired by the other residents and the staff members for her independent spirit. Lucille is survived by two daughters, Homara L. Wells of Baldwin, MI and Sharon K. (John) Fox of Coloma; grandchildren, Cherie (Steve) Sunday, Teresa (Bill) Hatfield, and Jeff Fox; 7 great-grandchildren; 2 great-great grandchildren. Lucille was preceded in death by her parents and siblings, husband Homer and grandson, Cary Gess.

Coloma – Lucille A. (Ryno) Umphrey passed away Tuesday, February 21, 2012, at Sunset Shores Assisted Living Facility at the age of 100. Funeral services celebrating her life will be held at 7:00 P.M., on Friday, February 24, at the Davidson... View Obituary & Service Information

The family of Lucille A. Umphrey created this Life Tributes page to make it easy to share your memories.

Send flowers to the Umphrey family.