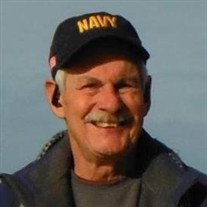 Lynwood “Lyn” Rowe Zepik, 75, of St. Joseph died Saturday, March 6, 2021 in his home in Lincoln Charter Township. Lyn was born on January 27, 1946, in Benton Harbor, Michigan. He attended Saint John’s Catholic School and graduated from Benton Harbor High School in 1965. He married Kay Messer in 1980. Lyn retired from the U.S. Navy with over 20 years of meritorious service. He first enlisted in the Navy in 1966 and went through boot camp at Great Lakes, and then earned his lifelong rating as a radioman. After being stationed in Coronado, California for two years, Lyn went to Vietnam in 1969 aboard the USS Jennings County. After a short stint in civilian life, he re-entered the naval service and was stationed at the Military Sealift Command in Naples, Italy. Lyn was a proud Navy airman who served in Fleet Air Reconnaissance Squadron Four, the United States European Airborne Command Post at RAF Mildenhall, and the NATO AWACS component in Geilenkirchen, Germany. He finished his service aboard the USS George Washington in 1993. Achieving the enlisted rank of senior chief, he earned many awards throughout his career including the Vietnam Service Medal, Vietnam Campaign Medal, and Combat Action Ribbon. He also earned his prized naval aircrew wings as well as his air warfare and surface warfare pins. He returned to his hometown of Benton Harbor after retirement from the Navy. He loved the sand and surf. He was an avid and devoted dog lover who took his “kids”, Mikie, Shannon, Gemma, and MItzie for daily runs on the beach or in the park He was preceded in death by his father, Fred Zepik, August 19, 1959 and mother, Florence Zepik, January 6, 2009. Surviving relatives are his sister Sandra Stringfellow of St. Joseph, nephew Dennis and grandnephew Peter of Granger, Indiana, and nephew Bob (Anna) Vandenberg and grandnephew Cameron of Raleigh, North Carolina. A service will be held at the Fairplain Chapel of Florin Funeral Service in Benton Harbor at 1:00 p.m., Saturday, March 20. Cremation will precede the service, and burial of the ashes will be at North Shore Memory Gardens at some time in the future. Memorials may be made to Berrien County Animal Control, 1400 S. Euclid Avenue, Benton Harbor, Michigan 49022 or the charity of your choice. Please leave messages and memories at www.florin.net. Lyn was a special, outgoing and amiable family member who was always there when you needed him. He was a cheerful, fun-loving friend, and you always went away a better person for knowing Lyn. Lyn will be sorely missed, and we are all poorer for his loss.

The family of Lynwood "Lyn" Zepik created this Life Tributes page to make it easy to share your memories.

Send flowers to the Zepik family.