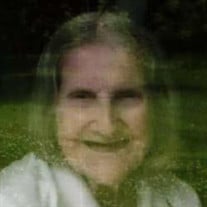 Margaret (Marge) Lucille Adams, 97, passed away Friday, December 4, 2020, at South Haven Nursing and Rehab Center in South Haven. Family funeral service will be held at a later date at Keeler Cemetery. Arrangements are being made by Fairplain Chapel of Florin Funeral Service in Benton Township. Please share messages, memories, or photos at www.florin.net. “It was love in the beginning and love to the end” A poem by son, Steve, written to his mother for Mother’s Day. A young girl was born in Indiana to the union of Jess and Anna. She ran, she played, she loved to sing and dance. When she met Ed, she discovered romance. No one could tell her he wasn't the one and to this union was born one beautiful daughter and five rambunctious sons. The first was Tom; their pride and joy. They truly loved their baby boy. Then came the war and Ed had to leave. Before he left, they created Dennis Keith. After the war, it was time to settle down. They returned to a home in Blossomland town. Ed went to work at the pool called Whirl. Lo and behold, this time it was a girl. They curled her hair and dressed her in lace. Ed was so proud of Lorrie's pretty little face. Then came Steve; he was a happy little boy. His smile brought them lots of Joy. A short time later, came another beautiful little grin; they called him Stan but we called him Lynn. David came, it seemed real fast. Carolyn thinks they saved the best for last. There were six in all; none were the same. The one thing they shared was the proud Adams name. We all grew up and went our separate ways to leave Ed and Marge to enjoy peaceful days. As they looked back over their lives, they began to realize The good far outweighed the strife. It was love in the beginning and love to the end that always allowed Ed to be Marge's forever boyfriend. It was true love that kept them living as one and allowed them to raise their beautiful daughter and five fine sons. Margaret was born on August 12, 1923 in Attica, Indiana to Jessie and Anna (Lilly) Craft. On August 27, 1942, Margaret married the love of her life Edward Adams and they enjoyed 65 years of marriage until his death in 2008. Margaret was a very loving mother, grandmother, and great-grandmother. She always had a song to sing and loved playing the organ. She was known for her beautiful rose gardens and enjoyed working with her flowers. But the thing she loved and cherished most in this world was her family. Margaret is survived by her daughter Lorrie Conklin of Navarre, FL, sons Steven (Debbie) Adams of Dowagiac, Stanley (Betty) Adams of Gobles, and David (Carolyn) Adams of St. Joseph, 11 grandchildren and many great grandchildren. Margaret was preceded in death by her husband Edward Adams, sons Thomas and Dennis, daughter-in-law Susan, son-in-law George Conklin, and her eight brothers and sisters and grandson Keith Adams.

Margaret (Marge) Lucille Adams, 97, passed away Friday, December 4, 2020, at South Haven Nursing and Rehab Center in South Haven. Family funeral service will be held at a later date at Keeler Cemetery. Arrangements are being made by Fairplain... View Obituary & Service Information

The family of Margaret Lucille Adams created this Life Tributes page to make it easy to share your memories.

Send flowers to the Adams family.