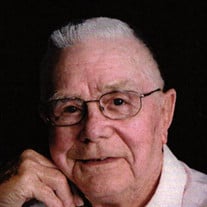 Nylor G. Hartwig, 95, of Coloma died on Thursday, February 11, 2021, at The Willows Assisted Living Center in St. Joseph, Michigan. He was born on February 19, 1925, to Gustave and Rose Ertman Hartwig, and was a graduate of Eau Claire High School Class of 1944, where he lettered in basketball and played tuba in the marching band. He married Clara Jean Snyder on March 18, 1944. Mr. Hartwig farmed with his father and for the Ben Bittner Farms of Eau Claire before going to work for the John Taylor Machine shop, where he apprenticed in tool and die. He then worked at Advanced Products and at Modern Plastics of Benton Harbor, retiring in 1987. He served in the U.S. Army during WWII at Fort Jackson, South Carolina and at Fort Lewis in Washington State. Mr. Hartwig was a member of the Coloma United Methodist Church for over 44 years with earlier memberships at New Hope United Methodist Church of Bainbridge Township and Chapel Hill United Methodist Church of Sodus. He and his wife were awarded the Outstanding Christian Service Award by the Berrien County Association of Churches in 1997. He was a lay member of the West Michigan Conference of the United Methodist Church. He volunteered at Community Hospital in Watervliet, the North Berrien County Food Pantry, and was active in the Tri-City CROP walk for years. He also volunteered with the Blossomtime Queen contest and served as a youth camp counselor for his church. He delivered noon meals to seniors for the North Berrien Senior Center, spent many hours repairing and remodeling the church, and enjoyed his hobby of woodworking, making items for family, church, and the hospital. Of his many life experiences, one of his most memorable was driving to Anchorage, Alaska-on two separate occasions. Perhaps his next memorable was when he learned to fly, fulfilling a life-long dream, and was later forced to land in the raspberry fields of his in-law's Sodus farm when his plane stalled on a cold winter's day. Mr. Hartwig is survived by his three daughters, Linda Kaye of St. Joseph, Tia Marie Moroney (Thomas) of Ada, Michigan, and Cathryn Ashley Snyder Mock (John) of Sodus. He was preceded in death by his wife of 73 years, Clara Jean Snyder Hartwig, and his son Larry Nylor Hartwig; a God and Country Award Boy Scout. Other survivors include his sister, Arbutus Zwar of St. Joseph, and several grandchildren and great-grandchildren. Private Family Services were held at the Fairplain Chapel of Florin Funeral Service in Benton Township. Burial followed at North Shore Memory Gardens. Memorials may be made to the Coloma United Methodist Church, PO Box 670, Coloma, Michigan. 49038. Please share messages, memories or photos at www.florin.net.

Nylor G. Hartwig, 95, of Coloma died on Thursday, February 11, 2021, at The Willows Assisted Living Center in St. Joseph, Michigan. He was born on February 19, 1925, to Gustave and Rose Ertman Hartwig, and was a graduate of Eau Claire High School... View Obituary & Service Information

The family of Nylor G Hartwig created this Life Tributes page to make it easy to share your memories.

Send flowers to the Hartwig family.