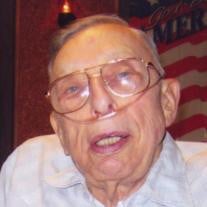 Otto Harvey Dettmann, Jr., 86, of Benton Harbor, passed away Friday morning, at Caretel December 28, 2012, following his courageous fight against congestive heart failure. A visitation will be held between 5:00 and 8:00 Wednesday evening, January 2, 2012, at the Fairplain Chapel of Florin Funeral Service, 1053 E. Napier in Benton Harbor with Masonic Rites at 7:30. Burial will be held Thursday, January 3 at Fort Custer National Cemetery at 1 P.M. in Augusta, Michigan with Military Rites. Memorials may be made to a charity of the donor’s choice. Messages of condolence may be sent to www.florin.net. Otto was born on March 13, 1926 in Oronoko Township, Michigan. He was one of eight children born to Otto, Sr. and Emma Dettmann. Otto proudly served his country during WWII in the U.S. Army. He retired from the Clark Equipment Company in 1982. Otto was a member of the DANK, VFW Post #1137, and the Masonic Lakeshore Lodge #298. He had many friends and acquaintances. Otto spent many years in his garden and rarely missed a chance to go dancing at the DANK or in Glendora. Most of all, Otto cherished time spent with his family. Otto is survived by his children, Darrell (Jean) Dettmann of Marquette, Michigan, William Dettmann of Mississippi, Yalonda (David) Forsythe of St. Joseph, and Rhonda (Randy) Short of Benton Harbor; grandchildren, Whitney, Brian, Ashley, and Brandon; a great-grandson; sisters, Selma Abel of St. Joseph, and Ruth Baer of St. Joseph; his brother, George Dettmann of Benton Harbor; and by numerous nieces, nephews, and great-nieces and nephews. In addition to his parents, Otto was preceded in death by his brothers, Richard, LeRoy, and Don and by his sister, Irene.

The family of Otto Harvey Dettman Jr. created this Life Tributes page to make it easy to share your memories.

Send flowers to the Dettman family.