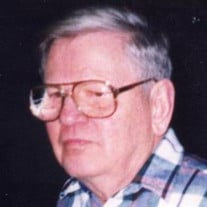 Paul L. Soderborg, Sr, 89, of Coloma died Monday, May 8, 2017 at the Hanson Hospice Center in Lincoln Township. Services celebrating his life will be held at 11 AM on Saturday, May 13, at the Davidson Chapel of Florin Funeral Service in Coloma. The visitation will begin at 10 AM until service time at the Davidson Chapel. Burial will follow at the Lakeshore Hagar Cemetery where military rites will be conducted. Memorials may be made to Hospice at Home or the Alzheimer’s Association. Please share memories, messages, or photos at www.florin.net. Paul was born on Dec 5, 1927 in Chicago to David and Olga Soderborg. He was a veteran of the US Army during WWII and served in the Occupation of Japan. He graduated from the Illinois Institute of Technology. He married his first wife, Naoma, in 1952 and she preceded him in death in 1987. Paul then married his second wife, Margaret Allen, and together they have celebrated 25 years of marriage. He was a mechanical engineer and had been employed at the V-M Corp, Clark Equipment, and Tele-Dyne Corp. He was a big White Sox, Bears, and Comets fan. Paul coached Hagar Little League, was an avid bowler, and was a former Moose member. He liked to travel and enjoyed going to the beach and wood working. Paul was a quiet and laid back individual who enjoyed his family. His family includes his wife, Margaret; his children, Paul “Larry” (Beverly) Soderborg, Jr. of Coloma, Steven Soderborg of Battle Creek and Daniel (Lynn) Soderborg of Port Richey, FL; his grandson, Joshua Soderborg of Florence, AZ; his step children, Dr. Otis Allen, Larry Allen, Steven Allen, David Allen, John Koneff, and Michael Koneff and his many step grandchildren and step great grandchildren. He was also preceded in death by his parents, and his brother, Donald.

Paul L. Soderborg, Sr, 89, of Coloma died Monday, May 8, 2017 at the Hanson Hospice Center in Lincoln Township. Services celebrating his life will be held at 11 AM on Saturday, May 13, at the Davidson Chapel of Florin Funeral Service in Coloma.... View Obituary & Service Information

The family of Paul L. Soderborg Sr. created this Life Tributes page to make it easy to share your memories.

Send flowers to the Soderborg family.