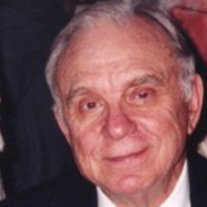 Raymond “Ray” M. Sreboth, 90, of St. Joseph, passed away Tuesday morning, March 26, 2013, at Caretel Inns of Lakeland in St. Joseph. Mass of Christian Burial celebrating his life will held at 11:00 a.m., on Wednesday, April 3, at St. Joseph Catholic Church, 211 Church Street, with Fr. Alphonse Savarimuthu officiating. Burial will be held Wednesday at 1:30 P.M. at Resurrection Cemetery in St. Joseph with Military Rites. Visitation will be held from 5:00 until 8:00, Tuesday evening, at the Dey-Florin Funeral Home, 2506 Niles Ave., in St. Joseph. The Rosary will be recited at 7:30. In lieu or flowers, memorials may be made to either St. Joseph Catholic Church or to Hospice at Home. Messages of condolence may be made to www.florin.net. Ray was born October 8, 1922, in Chicago, Illinois. He was one of two children born to Mathew and Mary Sreboth. He graduated from Hartford High School. Ray proudly served his country in the U.S. Army during WWII. He married Eva and together had five children. He got his Bachelor’s degree from Western Michigan University, his Master’s degree from the University of Michigan, and his Doctorate degree from Western. Ray devoted his professional life to public education. He served as Principal and Superintendant of Covert High School, as Superintendant of the Benton Harbor Public School System from 1962 until 1973, and later as Superintendant of Berrien County Intermediate District from 1973 until 1986. He was a member of Lest We Forget and the Wood Workers Guild. Additionally, he enjoyed researching Circus history in America and was a loyal fan to his alma-mater, Western Michigan University. He attended regular meetings with the Loyal Order of Raccoons at Big Boy in Stevensville. Most of all, Ray was devoted to spending time with his family. Ray is survived by his children, Marie (Tim) Wood of Frisco, Colorado, Nancy (Larry) Mohney of Kalamazoo, Ray, Jr. (Kathy) Sreboth of Coloma, Susan (Hans) Schroeder of St. Joseph, and Laura (J.C.) Dorfler of Oakley, California; grandchildren, Zack (Suzie) Mohney, Jake (Jenny) Mohney, Katie (Jason) Doehrman, Meghan (John) Boyer, Matthew Sreboth, and Ryan and Drew Dorfler; nine great-grandchildren; nephews, Michael (Jackie) Flick, Michael (Teddy) and Scott (Mary Anne) Sherry; niece-in-law, Holly Sherry; brother-in-law, Bob Dwyer; and by his sweetheart, Lois Saurbier. In addition to his parents, Ray was preceded in death by his wife Eva in 1985; his sister, Frances Flick; and by his nephew, Pat Sherry.

The family of Raymond M. Sreboth created this Life Tributes page to make it easy to share your memories.

Send flowers to the Sreboth family.