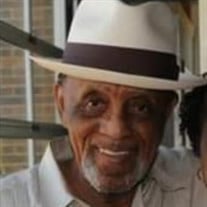 REGINALD SMITH GILL For I am persuaded that neither death nor life, neither angels nor demons, neither the present nor the future, nor any powers, neither height nor depth, nor anything else in all creation, will be able to separate us from the love of God that is in Christ Jesus our Lord. Romans 8:38-39 We celebrate the life of our beloved father, loving grandfather, great-grandfather, uncle, cousin and friend. Reginald Smith Gill, 89, of Benton Harbor, Michigan, passed away peacefully on Monday, January 17, 2022, at the Pine Ridge Rehabilitation and Nursing Center in Stevensville, Michigan. Reginald Smith Gill affectionately called “Reggie” by his family and friends was born on December 18, 1932, to the Christian lineage of the late Estelle Herndon nee Hughes and John Oscar Gill Sr. in Benton Harbor, Michigan. “Reggie” was preceded in death by his mother, Estelle Herndon, his father, John Oscar Gill Sr., his step-father, James Allen Herndon, one brother, John “Oscar” Gill Jr.; his wife of 27 years, Barbara Gill-McGinnis, sister-in-law, Wilma Jean Gill-Rice, three nephews, Gregory, Kevin and Mark Gill; his niece and great-niece, Valerie and Lisa Gill and one great-nephew Steven Gill. Reginald was formally educated in the Benton Harbor Area Schools and was a proud graduate of the Benton Harbor High School “Class of 1950” of which he was ranked #24 in his graduating class. Upon graduation from high school, Reginald immediately joined the United States Navy and served for 3 years before returning home and working for the Michigan Bell Telephone Company. After a brief stint at home, Reginald re-enlisted and served for 17 more years becoming a 20-year proud Veteran of the United States Navy who was honorably discharged with the rank of Navy Chief E-8. On February 18, 1957, Reginald was united in holy matrimony to the late Barbara Sharon McGinnis nee Lacy and to this union, four beautiful daughters, Toni Pamela, Regina Louise, Veronica and Linda Diana were born. After retirement, “Reggie” was employed at the Bendix Corporation in St. Joseph, MI. At Bendix, he served as a Supervisor for seven years and years later decided to enroll at Lake Michigan College in Benton Harbor, where he was listed on the “Dean’s List” every semester he attended. Reginald was always very smart, intelligent, philosophical and had a quick wit and never had a problem sharing his knowledge with all who came in contact with him. Reginald was proud of his service to his country and established many lifelong relationships across this country especially on the east coast with his military friends who became a part of his cherished extended family. “Reggie” was a proud member of the Benton Harbor Doris “Dorie” Miller American Legion Post 410 and served there with his fellow veterans in many capacities. He loved his “Post’ family and they loved and respected him. He will forever be missed in their hearts. There are many accomplishments Reginald achieved in his well lived life, but of all the accolades and accomplishments in his life, he was very proud of being a father to his children. “Daddy” as he was affectionately called by them was an adored and caring father. He always provided for them and it was very important to him that they knew how to be safe in this world when they went out on their own and that they were always conscious of the importance of their reputations and names. In their eyes, he was the smartest, wisest and most witty man in this world. He loved his family and had a very special place in his heart for his grandchildren and great-grandchildren. His sense of humor, combined with a lack of tolerance for foolishness as he made you understand all aspects of life with a brush of his voice and a stroke of his words, will never be forgotten. Our “Daddy” was the coolest, most calm, suave and collected person ever and he will forever be an important missing piece of their lives. WE WILL ALWAYS LOVE YOU “DADDY”. Reginald leaves fond memories in the hearts of his four loving daughters, Toni Gill-Pearson of Benton Harbor, MI, Regina Gill-Cook of Lithonia, GA, Veronica Gill of Niles, MI, and Linda Gill-Robinson of Lithonia, GA; his two sons, Reinaldo Tripplett and his wife Marian of Benton Harbor, MI, and Larry Freeze and his wife Kelly of Ogden, UT; four beautiful nieces, Pamela Ann Chenevert, Sylvia Williams, Angela Gill and Donita Gill; two nephews, Paul Gill and Richard Morgan; a very special and dear friend, Adelle Taylor and a host of grandchildren, great-grandchildren, great-nieces and great-nephews, cousins, his veteran brothers and sisters of the Doris “Dorie” Miller American Legion Post 410 and a host of extended family members and friends. In life we have pleasures with our loved ones; we have sorrows and joys, but thank God for the memories that death cannot destroy Services celebrating his life will be held on Wednesday, January 26, 2022, at the Union Memorial AME Church in Benton Township. The visitation will be held at 10:00 a.m. until service time at 11:00 a.m. Mask are required to attend. Military Burial will take place on Thursday, at the Fort Custer National Cemetery in Augusta, MI. Please share messages or memories at www.florin.net Final Arrangements have been entrusted to the Fairplain Chapel of Florin Funeral Service, 1053 E. Napier Avenue, Benton Harbor, MI 49022.

REGINALD SMITH GILL For I am persuaded that neither death nor life, neither angels nor demons, neither the present nor the future, nor any powers, neither height nor depth, nor anything else in all creation, will be able to separate us from... View Obituary & Service Information

The family of Reginald S. Gill created this Life Tributes page to make it easy to share your memories.

REGINALD SMITH GILL
For I am persuaded that neither death nor...

Send flowers to the Gill family.