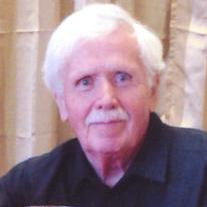 Robert D. “Bob” Gunkel, 76, of Benton Harbor went to be in the presence of our Lord in the early morning hours of August 1, 2012, holding tight to his earthly presence until he reached his 58th wedding anniversary to his lifelong love, Carole. Bob had been fighting Sarcoma cancer since January. Funeral arrangements celebrating his life will be held at 11:00 a.m., Wednesday, August 8, at the Fairplain Chapel of Florin Funeral Service, 1053 E. Napier, in Benton Harbor, with Ken Clark officiating. Burial will follow at Crystal Springs Cemetery with Military Rites. Visitation will be held Tuesday evening from 5:00 until 8:00 P.M. at the funeral home. Memorials may be made to either the Sarcoma Foundation of America or to Hospice at Home. Message of condolence may be sent to www.florin.net. Bob was born on August 23rd, 1935 in Benton Harbor to George Gunkel, Sr. and Mary Ethel Gunkel. He married Carole Clark on August 1st, 1954 and they had three daughters. Bob proudly served his country in the U.S. Army, Military Police. He worked for Whirlpool and studied business management at LMC. He worked for Producers Creamery for 20 plus years and then became a district manager of several Cass Dairy Stores before purchasing and B&C Cass Dairy Store, which he ran successfully for 23 years before his retirement. Bob and Carole began wintering in Florida in their motor home away from home before purchasing a permanent winter haven in North Fort Myers, Florida, where they enjoyed being “snowbirds” and the many great friendships with people from all over the U.S. and Canada. Bob was a member of the Benton Harbor Moose Lodge and enjoyed time spent at the Moose Lodges in Florida. Bob will be remembered for his absolute dedication to his family, his hard work and compassion. He was always helping others in need and put others needs above his own. Bob cherished the time he spent with his family, and enjoyed spending time with his dogs Oscar, Kupsie and Destiny. Bob is survived by his wife, Carole; daughters, Tammy (Al) Lopez of Eau Claire, Carrie (Donnie) Weller of St. Joseph, and Darcy Gunkel of Stevensville; grandchildren, Jaime (Ricky) Crum and Monica (Erik) Hogue; great-grandchildren, Matteus Isbrecht and Ricky Crum, II; sisters, Julia Odiorne and Alta Layman; brother-in-law, Gene Tio; and by numerous nieces and nephews and friends. Bob was preceded in death by his brothers, George Gunkel, Jr. and Marlin Gunkel; and by his sister, Mary Tio.

Robert D. “Bob” Gunkel, 76, of Benton Harbor went to be in the presence of our Lord in the early morning hours of August 1, 2012, holding tight to his earthly presence until he reached his 58th wedding anniversary to his lifelong love, Carole.... View Obituary & Service Information

The family of Robert D. "Bob" Gunkel created this Life Tributes page to make it easy to share your memories.

Send flowers to the Gunkel family.