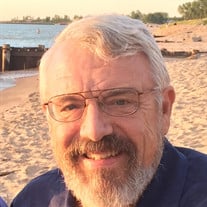 Robert E. King Jr., 67, of Benton Harbor, MI died Sunday, October 16, 2016. A Gathering of friends and family to celebrate Bob’s life will be held from 3 PM to 4:30 PM on Saturday, Oct. 22 at the Fairplain Chapel of Florin Funeral Service in Benton Harbor. You can also visit the memorial website at www.forevermissed.com/robert-e-king/ to share stories and memories online or visit www.florin.net. Bob was born in 1949 in Benton Harbor to Robert and Pearl King. He was a graduate of Benton Harbor High School and attended the National College of Chiropractic (NCC) in Lombard, IL and Western Michigan University in Kalamazoo, MI. He spent his early 20’s traveling the country and finally returning to his hometown in the late 1970’s. Bob was the Head of Security for the opening of the Orchard’s Mall. Following a tragic car accident in the early 1980’s that left him partially disabled, Bob spent the last 30 years in a variety of business endeavors – from growing Christmas trees, to selling seafood, to being a landlord, to plowing snow for several local businesses and homes. He never threw anything away because there was always something that needed fixing or someone who needed a hand. He loved NASCAR, photography, good music, and good times. He enjoyed tending to his land and the many animals and strays that also called it home. Bob had a big heart and that King smile that could light up a room. His family includes his sister, Mabel J. Rasmussen, of Longwood, FL; his niece, Katharine P. Ange and her husband, Kyle, and his grandniece, Isabella, all of Arlington,VA. Bob was preceded in death by his parents, Pearl M. King and Robert E. King, Sr., and his longtime companion Peggy Lee.

The family of Robert "Bob" King Jr. created this Life Tributes page to make it easy to share your memories.

Send flowers to the King family.