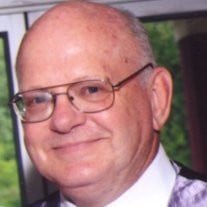 Ronald “Ron” Lee Marshall, 68, of Baroda, passed away, Thursday, February 21, in Benton Harbor, following a courageous battle against lung cancer. Funeral services celebrating his life will be held at 11:00 A.M., on Tuesday, February 26, at the Baroda Church of God, Lakeshore Campus, 5020 Cleveland Ave., in Stevensville, with Rev. Kendall Holder officiating. Burial will be private at Ft. Custer National Cemetery in Augusta at a later date. Visitation will be held Monday evening, from 6:00 until 8:00, at the Dey-Florin Funeral Home, 2506 Niles Ave., in St. Joseph. Memorials may be made to the family. Messages of condolence may be sent to www.florin.net. Ron was born July 1, 1944, in Benton Harbor. He was one of eight children born to Lloyd and Vida June Marshall. Ron served his country as a MP in the U.S. Army in New Mexico. Ron married Karen Irby on March 18, 1972 and together had three daughters. He served on the Baroda Village council for many years and was once the Village Chair. Ron retired from UPS after 29 years of service. He was a selfless person volunteering his time at the Baroda Church of God and at Passeros’ Pizzeria in St. Joseph. Ron will be remembered for both his outgoing personality and his sense of humor. He was a man of deep spiritual faith and love of all children. Most of all, Ron was a ‘family man’ who cherished time spent with his family – particularly his grandchildren – and his special dog, Bailey. Ron is survived by his wife of over 40 years, Karen; children, Melanie (Mario) Abbott of Baroda, Amy (Dane Judd) Foster of Kalamazoo, and Megan Marshall of Baroda; grandchildren, Courtney and Ellery Kruger and M.J. Abbott; and by his siblings, Myrtle (Allen) Thar, of Fountain, Michigan, Sally (William) Garberson of Stevensville, (twin brother) Don (Judy) Marshall of St. Joseph, Kathy (Charles) Campbell, Larry (Yogi) Marshall and Aline Norwood (James Dean) all of Benton Harbor. In addition to his parents, Ron was preceded in death by his sister, Janet Weschgel; and by his step-mother, Edna Current-Marshall.

The family of Ronald Lee Marshall created this Life Tributes page to make it easy to share your memories.

Send flowers to the Marshall family.