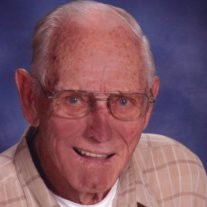 Roy C. Lucker, 88, of Stevensville, passed away early Thursday, October 10, 2013, at Caretel Inns of Lakeland in St. Joseph. A memorial service celebrating his life will be held at 11:00 A.M., Tuesday, October 15, at St. Paul’s Evangelical Lutheran Church, 2673 John Beers Road, in Stevensville with Pastor Nathan Fager officiating. Military rights will conclude the service. Visitation will be held from 10:00 until the time of the service, Tuesday, at the church. In lieu of flowers, memorials may be given to the family. Arrangements have been entrusted to the Dey-Florin Funeral Home in St. Joseph. Messages of condolence may be sent to www.florin.net. Roy was born April 21, 1925, in Stevensville to Royman and Edna (Ott) Lucker. He proudly served his country during WWII in the U.S. Navy. On January 2, 1954, Roy married Sarah June Packard. He was a mechanic at Rogel Motor Sales in Watervliet for 25 years before starting his own business, R & B Rebuilders. Roy moved to Lorida, Florida before moving back to Michigan in 2010. He was a member of the Stevensville American Legion, St. Paul’s Lutheran Church in Stevensville, and New Life Lutheran Church in Sebring, Florida. Roy was a ‘diehard’ fisherman, hunter, and enjoyed being outdoors. He also flew a plane and enjoyed racing hotrods. Roy is survived by his daughter, Kathryn Holaday of Stevensville; grandchildren, Joseph Harding of Colorado, Kimberly Harding of Stevensville, Melissa Gibson of St. Joseph, and Christopher Collins of Arizona; great-grandchildren, Mariko and Tyler Harding, Stephanie Poplawski, Joely Gibson, and Kalie and Toby Collins; one great-great-granddaughter, Sierra Poplawski Harding; his sister, Leola Domke of Sodus; his brother, Jerry (Alice) Lucker of Sebring, Florida; nephew and niece, Rodney and Vickie Packard; and by special friends, Phil and Mary Davis and Donald and Janet Winnell. Roy was the son the late, Royman and Edna (Ott) Lucker and was preceded in death by his wife, Sarah; sisters, Lavern Leng, Lucille Domke, and Luella Fausak; brother, Alvin A. Lucker; and step-son, David Thorton.

The family of Roy C. Lucker created this Life Tributes page to make it easy to share your memories.

Send flowers to the Lucker family.