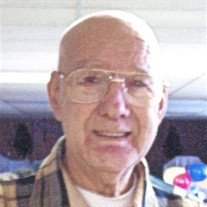 Samuel B. Perrone, Sr., 91, of Benton Harbor died Wednesday, August 12, 2015, at his home. Services celebrating his life will be held at 1 PM on Monday, Aug 17, at the Calvary Lighthouse Church at 2651 E. Main in Benton Harbor. Burial will follow in North Shore Memory Gardens where Military Rites will be held. The visitation will begin at noon on Monday at the Calvary Lighthouse Church. Arrangements are by the Fairplain Chapel of Florin Funeral Service in Benton Harbor. Memorials may be made to Hospice at Home. Please share memories, messages or photos at www.florin.net. Sam was born on April 7, 1924 in Benton Harbor to Vincent and Virginia Perrone. He was a veteran of the US Army during WWII. He married his wife, Louise, in 1950 and together they celebrated 64 years of marriage before her death in 2014. Sam was an auto mechanic with several auto dealers in the area. He was also one of the founders of the Calvary Lighthouse Church and his faith made him a “Man of God”. Sam was also an avid radio controlled airplane operator and was a designer, engineer and aviator of them. There was not anything that Sam could not design or build. Sam was a compassionate strong will individual who was always giving to others and a friend to everyone. Sam loved spending time with his family. He is survived by his children, Robert Perrone, Sr. of MO, Rhonda Sorrels of Benton Harbor, Jerry Perrone, Sr of Scottville, MI, Gary Perrone of Benton Harbor, Samuel Perrone, Jr. of Berrien Springs, and James Perrone of Benton Harbor; his brother, John Perrone of CA; his many grandchildren and his many great grandchildren.

Samuel B. Perrone, Sr., 91, of Benton Harbor died Wednesday, August 12, 2015, at his home. Services celebrating his life will be held at 1 PM on Monday, Aug 17, at the Calvary Lighthouse Church at 2651 E. Main in Benton Harbor. Burial will... View Obituary & Service Information

The family of Samuel B. Perrone Sr. created this Life Tributes page to make it easy to share your memories.

Send flowers to the Perrone family.