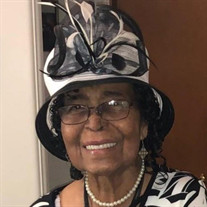 The Soul of a Mother Shirley Brent, the Matriarch of the family, was born to the late Milton and Irma Smith on July 29,1936 in White Castle, Louisiana. She was the oldest of five children. At the age of eight, the family moved to Michigan... View Obituary & Service Information

The family of Shirley Mae Brent created this Life Tributes page to make it easy to share your memories.

The Soul of a Mother

Shirley Brent, the Matriarch of the family,...

Send flowers to the Brent family.