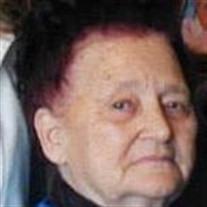 Susie L. Wakefield, 99, went Home to be with the Lord Thursday, January 22, 2015 surrounded by her beloved family and friends. Susie was born on Jan 16, 1916 in Elkmont, AL to Tish and Minnie Brooks. She married Robert Wakefield on December 8, 1932. They went on to have 8 children together and were married 58 years. She was a devout Christian who faithfully attended the Living Word Church of God in Coloma, MI. Best known as "Momma Susie" she was a devoted wife and mother to all that entered her home. She thoroughly enjoyed sewing, cooking and loved taking care of her many grandchildren, great grandchildren and great great grandchildren. Susie was a strong, selfless woman who was giving and nurturing to everyone she met. She is survived by her children, Charles (Charlene) Wakefield of Culleoka, TN; Morris (Rita) Wakefield of Coloma; Sylvia "Jeannette" Adams of Watervliet; Jerry (Doris) Wakefield of Stevensville; John "Tommy" (Linda) Wakefield of Benton Harbor; Linda Arthur of Watervliet; Sheila "Dianne" (Lewis) Evans of Coloma and Shannon (Rick) Howell of Watervliet; her brother Gilbert Brooks of AL; her sister, Mabel Black, of AL; her 31 grandchildren and her many great grandchildren and great great grandchildren; including Chad Adams, Breana Adams, Dystiney Childs, Ariana Adams and Braylin Crafton all of Watervliet. She was preceded in death by her husband, Robert in 1990; 3 sons, James Allen Wakefield, Ronnie Musgrove and Mike Musgrove; brothers Freddy Brooks, Robert Brooks, George Brooks, and Bobby Lee Brooks; sisters Effie Boyd and Ruby Cline. Visitation will be from 3 PM to 6 PM on Sunday, January 25 at the Dey-Florin Chapel, Saint Joseph, MI A Christian burial service celebrating her life will be held at 11 AM on Monday, January 26, at Dey-Florin St. Joseph, MI. Burial will follow at Hickory Bluff Cemetery Stevensville, MI.

Susie L. Wakefield, 99, went Home to be with the Lord Thursday, January 22, 2015 surrounded by her beloved family and friends. Susie was born on Jan 16, 1916 in Elkmont, AL to Tish and Minnie Brooks. She married Robert Wakefield on December... View Obituary & Service Information

The family of Susie L Wakefield created this Life Tributes page to make it easy to share your memories.

Send flowers to the Wakefield family.