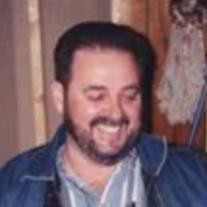 Thomas A. Boone, Sr., 60, of Benton Harbor and formerly of Covert died Thursday, January 03, 2013, at the South Haven Nursing Home. Services celebrating his life will be held at 1 PM Monday, January 7, at the Red Arrow General Baptist Church in Benton Township with Rev. Richard Kiser officiating. Burial will follow in Millburg Cemetery. The visitation will be held from 2 PM to 4 PM on Sunday at the Davidson Chapel of Florin Funeral Service in Coloma. Memorials may be made to Berrien County Cancer Service. Thomas was born on Sept 9, 1952 in Benton Harbor to Roy and Emma (Huberty) Boone. He worked for several tree services trimming trees for different power companies. He retired from work because of bad health in 2005. He loved hunting, fishing and playing cards with his friends. He is survived by his best friends, Kathy and Ronnie DeBusk who took care of him in his last years of life and their son, Cameron DeBusk. He is also survived by his son, Thomas (Jeanette) Boone, Jr. of Covert, 3 grandchildren, Abigail, Tripper, and Clayton; his sister, Lorine Bravo, of Lawrence; his brother, Ray Boone, of TX; his several nieces and nephews, his aunt, and his cousins. He was preceded in death by his parents, 2 sisters, Clara Boone and Denise Boone and his brother, Frank Boone.

The family of Thomas A. Boone Sr. created this Life Tributes page to make it easy to share your memories.

Send flowers to the Boone family.