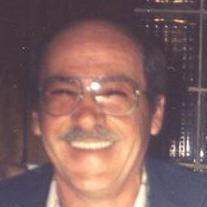 Watervliet – Victor Emmanuel Abbott, 69, of Watervliet, passed away on Sunday morning, January 15, 2012, at Lakeland Regional Medical Center in St. Joseph. Funeral services celebrating his life will be held at 2:00 P.M., Wednesday, January 18, at the Fairplain Chapel of Florin Funeral Service, 1053 E. Napier, in Benton Harbor, with Fr. Bill Jacobs officiating. Burial will follow at North Shore Memory Gardens in Hagar Shores. Visitation will be held from 12:00 until 2:00 P.M., Wednesday, at the funeral home. Memorials may be made to the Humane Society of Southwest Michigan. Messages of condolence may be sent to www.florin.net. Victor was born on February 15, 1942, in Benton Harbor. He was one of five children born to Daniel and Angeline Abbott. Victor worked for Kaywood Mfg. for over 30 years. He later went into private farming. He enjoyed growing produce and selling at local farmer’s markets. Victor loved all animals, life, and everything which gave life. He loved being around people and “he had nothing bad to say about anyone.” Most of all, Victor cherished time spent with his family – particularly his grandchildren. “Nothing was more important to him than his family.” Victor is survived by his children, David (Tamara) Abbott of Watervliet and Karri (Michael) Gordon of Berrien Springs; grandchildren, Sophia, Olivia, Joshua, Zachary (Brooke), Jacob, Kaylena, and Caleb; 10 nieces and nephews, numerous great-nieces and nephews; and one great-great-niece; siblings, Daniel (Barb) Abbott of Benton Harbor, Anthony (Linda) Abbott of Benton Harbor, and Mary (Ed) Schults of Coloma; his aunt, Lois Abbott of St. Joseph; sister-in-law, Roberta Abbott of Sodus; and is expecting his first great-grandson in May. In addition to his parents, Victor was preceded in death by his brother, David and recently by his dog, Buddy.

The family of Victor Emmanuel Abbott created this Life Tributes page to make it easy to share your memories.

Send flowers to the Abbott family.