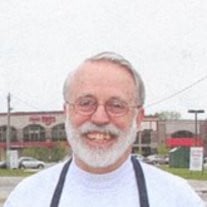 William (Bill) Stringfellow, 66, of St. Joseph died Tuesday, January 29, 2013, at Royalton Manor in St. Joseph. A Mass celebrating his life will be held at 2 PM on Friday, February 1, at St. Joseph Catholic Church in St. Joseph. The visitation will be held on Thursday from 5 PM to 8 PM at the Dey-Florin Chapel of Florin Funeral Service in St. Joseph where Prayers will be held at 7 PM. Cremation will follow the service and burial of the ashes will be at North Shore Memory Gardens. Memorials may be made to the Univ of Mi Cancer Research Center. (Mail donations to: Medical Development, ATTN: Kim Schuster, 1000 Oakbrook, Suite 100, Ann Arbor, MI 48104-6815). Please leave messages and memories at www.florin.net. Bill was born on July 16, 1946 in Anchorage, Alaska. He married his wife, Sandra Zepik, in 1981 and together they celebrated 32 years of marriage. Bill was not only a devoted husband and father, but served with distinction in the United States Navy for over twenty years. Bill was first and foremost a respected leader, and always leaned forward in any assignment he was given ensuring the job got done right the first time. He first enlisted in the Navy in 1970 and went through boot camp at the Naval Recruit Training Command in San Diego and subsequently qualified in submarines and as a crypto logic technician (maintenance) serving many U.S. Naval Security Group detachments and organizations through his career. He was commissioned as an officer in 1982 and he served as a submarine officer at several submarine commands including the USS Parche. He finished his career at the Trident Refit Facility in Bangor, Washington until his retirement in 1994 as a Lt Commander. Bill earned a number of personal awards throughout his career including the Defense Meritorious Service Medal, Meritorious Service Medal (7), Navy Commendation Medal (4), and Navy Achievement Medal (3). After retirement from the Navy, Bill graduated in 1999 from the California State University, Sacramento with a BS degree in Computer Science. He retired Nov 1, 2012 from Hewlett-Packard. He was a 4th degree Knights of Columbus. Bill was also a member of the Shoreline Garden Club. He enjoyed sailing and was always volunteering for something. Bill was a happy individual who was a devoted family man and a true gentleman. Survivors include his wife, Sandra; his step-children, Dennis (Jaime) Vandenberg and Bob (Anna) Vandenberg; his brothers, Michael Stringfellow and Richard Deisher; his sister, Candy Bell; and his 2 grandchildren, Cameron and Peter. He was preceded in death by his mother, Maxine, and his step-dad, Richard Deisher.

The family of William Bill Stringfellow created this Life Tributes page to make it easy to share your memories.

Send flowers to the Stringfellow family.