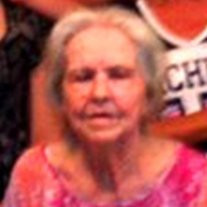 Coloma – Wynona Ezell, 91, of Coloma, passed away peacefully on Monday afternoon, December 30, 2013, at her home surrounded by her family. A memorial service celebrating her life will be held at 6:00 P.M., on January 6, 2014, at Lily of the Valley Church on M-140 in Covert, MI. The Davidson Chapel of Florin Funeral Service, 249 E. Center Street, in Coloma has been entrusted with the arrangements. Cremation has taken place and burial will be private at a later date. Memorials may be sent to Lily of the Valley Church. Messages of condolence may be sent to www.florin.net. Wynona was born on August 2, 1922 in Huntsville, AL. She married Clarence Ezell and together had 10 children. Wynona enjoyed musical activities including playing piano, guitar and singing. Wynona had a very deep faith in her Lord and Savior, Jesus Christ, and was not ashamed to share her faith with anyone. She had a heart-of-gold and would never turn down giving help to anyone in need. Wynona never complained about anything and could always be counted on as being a ‘loving peacemaker.’ Most of all, Wynona cherished time spent with her beloved family – her children, grandchildren, great-grandchildren, great-great-grandchildren, brothers, sisters, nieces and nephews. Wynona is survived by her children, Jerri (Norm) Kinny, Judy Johnson, Paul Ezell, Nona Jackson, Frank (Chris) Ezell, Tony (Brenda) Ezell, Candice Robinson, and Robin (Daniel) Dubas; 33 grandchildren; 62 great-grandchildren; and several great-great-grandchildren. In addition to her parents, Wynona was preceded in death by her husband, Clarence; her children, Peggy Herrmann and Danny Ezell; and her grandsons Bruce Herrmann and Frankie Ezell, Jr.

The family of Wynona Ezell created this Life Tributes page to make it easy to share your memories.

Send flowers to the Ezell family.